A few weeks ago in leading the Sunday Service pastoral prayer I asked our church for prayer for the Southern Baptist Convention. I doing so I mentioned that there were concerning matters in the forefront of the convention — even in the media. Below I want to speak to those matters, explain the SBC a bit, and offer some clarity on the usefulness and faithfulness of the convention.

WHAT IS THE SOUTHERN BAPTIST CONVENTION?

The Southern Baptist Convention (SBC) was formed in 1845 as constituents met in Augusta, Georgia, to, among other things, join in corporately funding global missions. The SBC today claims 15+ million members and is made up of about 50,000 churches across the world. The convention is the 2nd largest denomination in the U.S. (2nd to Catholicism).

Technically, the SBC only legally exists for two days a year when messengers of the convention are invited to vote on SBC matters. The Executive Committee works to fulfill the wishes of messengers through the year.

The SBC has not survived for over 170 years without enduring significant conflict. The first president of the convention, William B. Johnson, was himself a slave owner. In its early years, the SBC faced deep divisions over the issue of slavery. In 1928, it was discovered that Clinton S. Cranes, a treasurer in the SBC, had stolen $909,161 from the convention. Then there was an era of serious theological waywardness that led to the conservative resurgence, starting in the late 70s, and the formation of a new Baptist convention in the 90s. The SBC has endured conflict and scandal time and time again. Now, the SBC must do the same in order to continue.

As we approach the 2018 convention meeting in Dallas, the several issues swirling about include racial disparity in committee appointments, the handling of sexual and physical abuse, debate over the “social gospel” and “social justice”, allegations of sexual abuse by Paul Pressler, long-standing differences on theological view points, and the departure of Frank Page (President of the Executive Committee) following marital unfaithfulness.

As Southern Seminary president, Al Mohler said, “The SBC is in the midst of its own horrifying #MeToo moment.” I agree with Mohler as well when he says, “The terrible swift sword of public humiliation has come with a vengeance.” The SBC endures various debates in perpetuity. But in seemingly no time, we have come to face very public embarrassment about very serious matters of integrity.

This is not to mention that there is a presidential election which includes one candidate who withdrew his candidacy in 2016 after a rare run-off vote. In 2016, JD Greear withdrew after he received 47.8% of the vote and the now president, Steve Gaines, received 49.96% of the vote. This year, JD Greear has accepted nomination for the presidency again.

I pray for the SBC to be truly and deeply unified in the gospel and all its implications. God does not need the SBC, and when we are in heaven we will not be singing about the SBC. But as much as God may use it, may the SBC be unified around the gospel of Jesus Christ. The gospel itself is the only enduring power of the SBC.

Dr. Paige Patterson, president of Southwestern Baptist Theological Seminary (SWBTS) in Ft. Worth, has been the center of heated public debate which has garnered broad media attention. Even the Austin Statesman reported on the controversy  as many women have signed a petition for his removal . Several videos, including audio clips of sexist comments and the mishandling of marital abuse, surfaced in recent months. Yesterday, while the SWBTS convened to dertermine Patterson's future as president, the Washington Post reported new allegations that Patterson mishandled a report of rape while serving as president of Southeastern Theological Seminary.

Dr. Patterson’s comments were indisputably unbecoming of minister of Christ. What, if any, illegal counsel or actions Dr. Patterson has engaged in is for authorities to determine in cooperation with the seminary entities involved. What we know is what was said by Patterson in the recordings and what was reported by the SWBTS board of trustees this week:

“After much prayer and a more than 13-hour discussion regarding challenges facing the Institution, including those of enrollment, financial, leadership and institutional identity, the Board determined to move in the direction of new leadership for the benefit of the future mission of the Seminary.”

It is difficult to convey what a sad turn of events this is for the SBC (and me personally). Dr. Patterson has been a leading figure in the SBC for many decades, including his time as SBC president in 1999-2000. He has been known as the leader, the epitome even, of the conservative resurgence. Current presidential candidate, JD Greear, warmly refers to Dr. Patterson as his mentor in this article. To see his ministry at SWBTS and his reputation in the SBC come to this is a sad testimony of one of the most influential figures in SBC history. Worse, this controversy will most certainty confuse the gospel itself for many.

I pray for a new era of faithful training for ministry at SWBTS to begin today! I pray and hope women in and out of the convention know that they are valued, protected, and safe. I pray churches make it so. There should be no question that we are prepared to handle such incidences appropriately.

"The church and any institution or ministry serving the church must be ready to assure safety and support to any woman or child or vulnerable one threatened by abuse." - Al Mohler

WHAT IS HAPPENING IN THE SBC?

According to the news, the only thing happening in the SBC is controversy, conflict, and scandal. While it is difficult to convey the weight and the depth of the issues at hand, they still do not define the everyday work of the SBC as whole. Here are some things to consider about the SBC in the last two years:

What an amazing work! What a great cooperation!

To be clear, this is not an attempt to whitewash any current controversy. But the reality is that the SBC mission is continuing underneath what currently takes up so much media space. Professors are teaching. Preachers are preaching. Churches are gathering and going. The gospel is going forward.

We must face this moment of public disgrace with repentance and humility. We must also continue the faithful work of training and sending pastors to plant churches and make disciples around the world. The two, this moment and the long-game movement of the SBC, are inseparable. How we handle the moment interprets the whole ministry of the SBC.

With such bad press, the gospel itself may be distorted for some. So, as SBC members and as the body of Christ, it is important that we distinguish what is the true gospel and what is not. This has been the task from the first disciples until now. We know the truth of God has been opposed from the beginning. By our belief and our lives, as far as our reach and voice allow, we should seek to clarify and proclaim the gospel of the Son of God, Jesus of Nazareth, crucified and resurrected for sinners.

I praise God for so much good work in the name of Christ. Let us pray for powerful gospel clarity. Pray for our missionaries, pastors, and Christian workers all over the world! 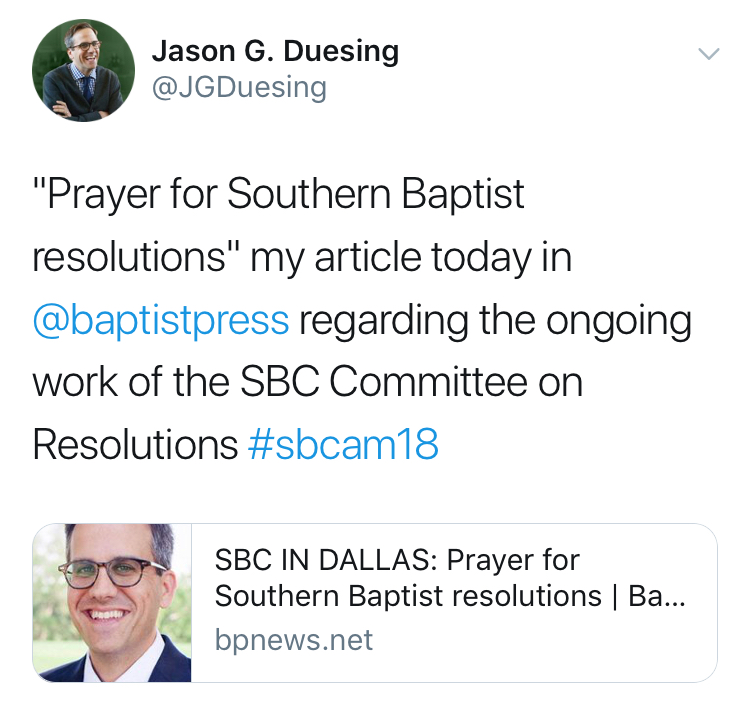 yesterday, the Resolutions Committee had received 627 resolutions for the 2018 convention!

I expect this year (some resolutions have already been made public) that there will be resolutions sent to the committee on nearly every issue out there. There should be. But resolutions only lay on us the ongoing personal responsibility to speak clearly and biblically about matters of abuse, racial unity, and the handful of other cultural questions before us today.

God’s love for us and our love for God should motivate us to seek the good of our neighbors. We should protect women in abusive relationships. We should seek gospel unity, forsaking all forms of racism and preference. We should do what we personally can do—“love mercy and do justice” and “love God with all our hearts and to love our neighbor as our selves” as we preach the gospel of Jesus Christ.

PRAY FOR THE SBC CONVENTION IN DALLAS

Pray for the SBC meeting in Dallas, June 12-13. Messengers (mostly pastors) from all over will gather for the appointment of offices, to hear reports, to discuss and approve resolutions, and to send missionaries. Pray for true unity in the gospel.

Here are a couple of articles from figures in the SBC:

Here is the taste I would want to leave in my church members’ mouths: the celebration of sending missionaries.

My first convention to attend was Phoenix in 2017. I learned a lot. But I was unexpectedly moved, too. This moment is one that has lasted in my memory, even until today. It is one of many things that makes me eager to return this year. It makes me eager to continue our church’s support of the SBC. It’s the “Sending Celebration” led by IMB President, David Platt.

Listen to it all or skip to minute 14:15 in this video. These are young singles, young couples, and young families giving their lives to the spread of the gospel to all nations. That is something to celebrate.

What Satan is Doing in Our Lives and Church